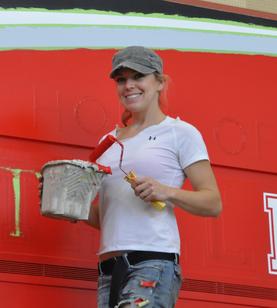 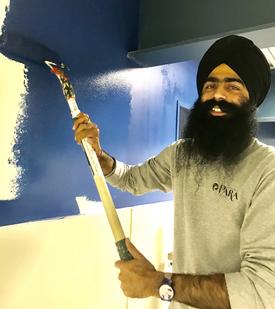 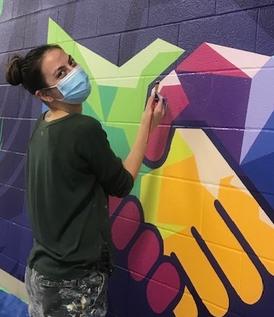 Carly Paterak  is a London based artist, designer, and illustrator. Having graduated from Fanshawe College in Fashion Design in 2015, she decided to move to Toronto where she worked as a Design Assistant for several companies, including Spanner and Tonia DeBellis. Through these experiences she became very skilled at graphic design and illustration. She decided to move back to London to continue her career as a freelance artist, specializing in technical illustration and textile print design.  Carly is also a talented abstract painter and has taken on several outdoor mural projects, which has become one of her favourite types of work yet.  She has been working with Muralworks since 2019 where she continues to grow and practice her skills as an artist. Carly is incredibly hard-working, and her strong design sense and playful personality are highly valued at Muralworks!

Andrea Carroll  is a practicing artist from Stratford, Ontario, and owner of Muralworks.  She graduated from  the Visual Arts Program at the University of Guelph, before attending the Faculty of Education at Queen's University in hopes of becoming a teacher.  As part of her teaching practicum, she joined a team of artists to design and complete a mural at the Kingston General Hospital, which she thoroughly enjoyed - even more so than teaching!  After graduating, she interned with renowned mural artist, William Lazos, in Toronto, ON, and later began working as an art instructor for Artshine Inc., an art company hosted by various schools in Ontario. Through these experiences she became aware of the need for increased exposure to art in the school system as well as noticing that most schools were in desperate need of a makeover!  Her company, Muralworks, began in 2014, transforming schools in Southwestern Ontario, creating school spirit and an inviting, inclusive space for students and staff to enjoy.  Her keen eye for detail and ability to visualize the creative potential in any space allows her and her team to create professional and stunning work.

Amandeep Singh Gill, otherwise known as "Deep", is a Toronto based mural artist, father, and practicing fine artist who has been with Muralworks since 2016. Residing in Punjab, India, until the age of 18, he decided to follow his passion for art and move to Canada to attend the Visual Arts program at Centennial College (much against his parents wishes of taking over the family farm!).  Since graduating, he has worked on countless mural projects with William Lazos, Mural Form, and Cube Works Studio, as well as several portrait commissions.

Deep is always in high demand due to his incredible skill set, hard-working nature, and easygoing personality.